Some health spas, homeopathic clinics, and others have touted the use of thermography as an alternative to mammography. The FDA and cancer experts say there is no proof that it can spot or detect breast cancer. In fact, the FDA has issued warnings and fines to health care providers who make misleading claims about thermography.

The biggest risk is that if you get a test that’s not proven to be effective, it could mean that your breast cancer is diagnosed later, when treatment is harder and the odds are worse.

“The most comprehensive evidence that we have tells us that mammography is the best tool we have to save lives, which is why it is advocated and advised by almost every medical organization,” says Lars J. Grimm, MD, MHS, FSBI, a breast radiologist at Duke University Medical Center, and associate professor of radiology at Duke University School of Medicine. “Breast cancer affects 1 in 8 women and mammography is the only way for us to detect it early.”

The earlier breast cancer is found, the easier it is to treat, the more treatment options are available, and the more likely a patient is to have a better outcome, Grim notes.

Rachel Brem, MD, agrees. She’s the director of the Breast Imaging and Intervention Center and the program leader for breast cancer at the George Washington Cancer Center, in Washington, DC.

Brem chose to specialize in breast cancer after her mother had the disease. Years into her career, she herself was diagnosed with breast cancer. Now 27 years cancer free, in addition to her work at George Washington, she is also the chief medical officer of the Brem Foundation, where she is educating women about the disease and prevention.

“There is absolutely no data to show that there is any reduction in mortality or benefit at all with thermography,” Brem says. “We’ve got a lot of options to help us find early, curable breast cancer, but thermography is not one of them.”

What’s the Difference Between Mammography and Thermography?

Mammography and 3-D mammography (also known as breast tomosynthesis) take low-dose X-ray images of the breast. These images allow doctors to check for lumps and other early signs of breast cancer.

Mammography is “the only proven imaging modality that has been shown to improve breast cancer survival,” Grimm says.

Thermography uses an infrared camera to show heat and blood flow in the body. Grimm explains that cancers use a lot more energy, so the theory is that if there is breast cancer, the area would show up with higher temperatures.

“The problem is that there have been a tremendous number of studies involving hundreds of thousands of women, comparing mammography to thermography, that shows that thermography is just not very good,” Grimm says.

“It misses a lot of cancers, and it has false positives,” Grimm says. “So when you look at them side by side, you see that the thermogram does not do as good a job as a mammogram.”

When Should I Get a Mammogram and How Often Do I Need One?

Your doctor can tell you what’s appropriate for you, given your personal risk for breast cancer.

“Based on the data, the most lives will be saved [by women] getting a mammogram every year,” Brem says.

People at higher risk for the disease – including those with a family history of breast cancer – may need to start mammogram screenings earlier. And if they also have dense breast tissue, their doctor may recommend that they get additional imaging test – breast ultrasound or MRI – in addition to their mammogram. Those extra tests don’t replace mammography. Nothing does.

“Effective screening starts with mammography. For some women, that may not be enough,” Brem says.

When women get regular mammograms, breast cancer can often be found before a woman has any symptoms of the disease or before a lump can be felt.

“Not only is the survival rate different [with early-stage cancer], but the journey that a woman has to go through is much easier, too,” Brem says. She notes that in early-stage breast cancer, the surgery and chemotherapy may be less extensive than if the cancer is found later.

What About Radiation Exposure With a Mammogram?

“In radiology, we take radiation safety very seriously. In terms of mammography, the dose of radiation we use is incredibly low and very tightly regulated,” Grimm says. “The risk of radiation is so small, and the benefit in breast cancer detection far outweighs the risks.”

Brem agrees. “The machines have to be scanned every year to make sure it’s below the dose that is allowed,” she says. “You get more radiation flying to California.”

Getting Over the Discomfort and Fear

Some women put off a mammogram because they worry it will be uncomfortable or they feel anxious about waiting for the results.

“We know that having a mammogram is anxiety-producing but it’s also lifesaving,” Brem says. “We hope that women today are empowered and informed and will advocate for themselves. We believe that every woman should have a mammogram.”

On Father’s Day, A New Dad Recalls His Near-Death Experience 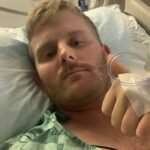